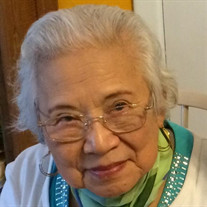 On July 9, 2018, Victoria (Nona) Calaguas Tuason entered peacefully through the heavenly gates of God's Kingdom as she was surrounded by her children. She is reunited with her husband, Norberto Cortez Tuason; her parents, Dr. Fulgencio Calaguas and Fidela de Jesus Calaguas; her siblings, Marino Calaguas, Nenita Calaguas Abad, Virgilio Calaguas, and Jesus Calaguas; and her first born, Crispin Tuason. She lives forever in the hearts of many she left behind, most notably her last surviving sibling, Sr. Ma. Cecilia J. Calaguas, O.P., her six children - Victoria Tuason Vaughan (Joseph), Zita Tuason Chiacchia, Nanette Tuason Hardee (Doug), Sandy Tuason (Susan), Maria Tuason Combs (John), and Eric B. Tuason (Donna). Lovingly called "Gran’ma" and "Lola" by her grandchildren, they were her absolute pride and joy - Jacquelyn Vaughan Reiser (Jason), Matthew Eric Vaughan, Tia Michele Chiacchia, Angela Cecilia Chiacchia, Jack Andrew Combs, and Grace Victoria Combs. She is also survived by step grandchildren, Andrea Hardee Speizer (Darren), Brian R. Hardee, and Anna Elizabeth Moritz; step great-grandchild, Luke Walter Speizer; as well as numerous nieces, nephews, and extended family members. Born on September 14, 1928 in Bamban, Tarlac, Philippines, Victoria immigrated to America with her husband and children in 1967. The family lived in Glen Rock, New Jersey until 2012, when Victoria and Norberto moved to Largo, Florida, to be close to two of their daughters. Her professional career began as a stenographer at a large bank in the Philippines, which included working for a man who would later become the country's president. A woman of empowerment, Victoria achieved a CPA accreditation in the Philippines. She then continued to earn her MBA at Fordham University in New York City in the evenings while working full-time as a financial and economic analyst at a Wall Street bank - yes, all this while raising six children! Victoria (Nona) will be lovingly remembered as a compassionate and caring woman, profoundly committed to family, who gave so much of herself in everything she did. She was the epitome of the "high tech" mom and grandma, staying connected by text, facetime, and social media to all her children, grandchildren, and relatives in the US and the Philippines. Embracing technology enabled her to maintain her role as the "glue" that held the family together across mountains, rivers, continents, and oceans. Her many interests included cooking (a self-taught gourmet cook...food was always the center of our family gatherings), sewing (making many of her grandchildren's clothes), painting and drawing (self-taught again...sketching faces of friends and presenting the drawings to them as gifts), gardening (she adored her red roses and spent countless hours tending her azaleas, irises, and forsythias while nurturing her tomatoes, herbs, apple and pear trees), reading, playing piano (self-directed again, even before YouTube), listening to classical and operatic music (Chopin, Mozart, and Pavarotti were some of her favorites), and practicing tai chi and yoga. All of these she executed with passion and precision, emanating a pure love for the arts, which transcended to everyone who knew her. Whether it was dinner at a fancy restaurant, grocery shopping at a Filipino store, or quietly enjoying lunch in her patio, she took pride in "dressing up" (unfailingly accessorizing with a perfect matching scarf...green was her favorite color) and looking her best to enjoy each moment. Her deep devotion to God the Father guided her every breath as she lived each day to the fullest! By the grace of our Lord, the family gives thanks for the beauty, the wonder, and the love our mother so graciously shared with us all. Her spirit soars and lives eternally in our hearts, and we know that one day, we will be with her again, somewhere...over the rainbow. A family memorial service will take place on Wednesday, November 21, 2018, at 11:00 a.m., in the chapel at the Calvary Catholic Cemetery and Mausoleum in Clearwater, Florida, where Victoria and Norberto’s urn will be inurned in a niche. In lieu of flowers, donations may be made to St. Martin’s Foundation, Inc., a mission established by Sr. Ma. Cecilia J. Calaguas, O.P. and the Congregation of Dominican Sisters of St. Catherine of Siena in Quezon City, Philippines (www.stmartinsf.tripod.com). For details, please email [email protected] In the U.S., email Vicki Vaughan at [email protected]

On July 9, 2018, Victoria (Nona) Calaguas Tuason entered peacefully through the heavenly gates of God's Kingdom as she was surrounded by her children. She is reunited with her husband, Norberto Cortez Tuason; her parents, Dr. Fulgencio Calaguas... View Obituary & Service Information

The family of Victoria Calaguas Tuason created this Life Tributes page to make it easy to share your memories.

Send flowers to the Tuason family.