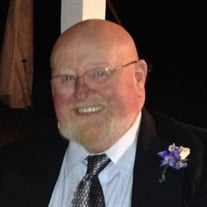 On Sunday September 20, 2020, Thomas Dennis Kane devoted husband and father of 3 children passed away peacefully at the age of 80 surrounded by his loving family in Largo Florida. Tom was born March 30, 1940 to Anne Josephine O'Keefe and Michael James Kane of West Haven CT. Tom enlisted in the Navy at the age of 17. He honorable and proudly served as a seaman and demolition frogman for the United States Navy. He served on destroyers and mind sweepers, including the USS Cotton, USS Grand Canyon and USS Elsmere. He later received his GED and went on to be a Licenced HVAC mechanic, obtaining is contractors license and working as a forman of the physical Plant at Weslyn University. Tom also proudly served as a Westbrook Constable and Marine Patrol Officer for 17 yrs. Tom met the love of his life and best friend Janet M. Fatibene in 1960. They were Married October 27,1962 in Bridgeport CT. They resided together in Bridgeport, West Haven, Westbrook CT and finally retiring to Largo Florida in 2003. Tom was known for his quick wit, jokes, and always trying to make us laugh. Tom enjoyed many adventure with his family and friends which including, hunting, boating, camping, off road jeeping in his 1946 CJ2A Willies and Riding his Harley Trike. Besides his wife Janet Kane he is survived by his daughter Kathleen (Kane) Sorensen and her husband Larry, Son Sean Kane and his wife Lisa (DiMauro) Kane, Daughter Colleen (Kane) Miller and her husband Russell, his grandchildren, Zachary Kane and fiance' Kelsey Swailes, Erin Kane, Kelsey (Dickman) DiBiase and her husband Tony, Ashlynn Dickman, Morgan Miller, Garrett Miller, Samantha Townsend. Tom's very devoted brother in law, Nick Fatibene and his wife Theodora, Sister in law, Grace Meldon, as well as many loving neices, nephews, and close family friends. Tom was predeceased by his sister Eileen Goodhue, his brothers Jack O'Connor, Donald Kane, Kenneth Kane, James Kane, Joseph Kane. The Entire Kane family is greatful for the support of the Empath Health Hospice Nurses and staff in Largo Florida. A Donation maybe made to Empath Health 5771 Rososevelt Blvd, Clearwater FL 33760. Janet Kane will be in CT @ 94 Kelsytown Rd, Clinton, CT 06413 at this time. A celebration of Tom's life will be announced at a later date.

On Sunday September 20, 2020, Thomas Dennis Kane devoted husband and father of 3 children passed away peacefully at the age of 80 surrounded by his loving family in Largo Florida. Tom was born March 30, 1940 to Anne Josephine O'Keefe and Michael... View Obituary & Service Information

The family of Thomas Dennis Kane created this Life Tributes page to make it easy to share your memories.

Send flowers to the Kane family.