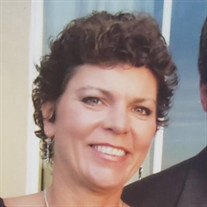 Beloved wife, mother, sister, daughter and nurse Teresa Mary de la Teja’s life was cut tragically short on September 8th, 2020. She passed in her hospital bed after unexpected complications following a fall two and a half weeks prior. She was 59. Teresa was known by all to have met her as happy-go-lucky with a big heart and a sense of humor to match. The third-born of six Irish-Catholic children from the Bronx, she became a pillar of her family. She met her husband Abelardo “Bill” de la Teja at Farleigh-Dickinson University, where she graduated with a nursing degree. The love of her life, Teresa described her husband Bill as the Ricky Ricardo to her Lucy. They spent 41 years together, marrying in 1982. Teresa devoted her 25-year career to the care of others as an RN, focused primarily on postpartum care. Her passion for helping transition new life into the world was unquestionable, regularly working late night shifts to make time for her family during the day. In 1985, Teresa gave birth to her first child, daughter Melissa. This was followed by the 1989 birth of her second child, son Robert. Her children remember her as a stubborn but supportive goofball who insisted on nightly family dinners and never discouraged any of their myriad hobbies and passions. After retiring, Teresa devoted her remaining years to traveling the world, various volunteer projects, collecting shark teeth on the beach and counting how many thong bikinis she could spot from her balcony. Teresa is survived by her husband Bill, daughter Melissa, son Robert, mother Mary-Alice, sister Ann and brothers John, Michael and Thomas. A viewing will be held Tuesday, September 15, 2020 in Grasso Funeral Home in Largo, FL. Due to Covid restrictions, the closest family members can come at 2pm and friends and extended family may attend after 3pm to avoid crowding. In lieu of flowers, the family is asking for donations to the Salvation Army.

The family of Teresa Mary de la Teja created this Life Tributes page to make it easy to share your memories.