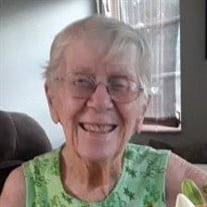 Sylvia Anne Maddalena, age 90, passed peacefully from this life on August 23rd at Palms of Pasadena hospital in St. Petersburg after a short illness. She was born on July 2nd, 1928 in Cambridge, Massachusetts to Mary Selma Blake and Franklin Philip Blake, Sr. After her parents were divorced she was adopted by her stepfather, John H. Miller in 1946. She attended a teachers college in Massachusetts, however, when her parents moved to St. Petersburg, Florida she transferred to Florida State University where she graduated with a Bachelor’s degree in Education. She met her future husband, Frank Pasquale (Patrick) Maddalena, who was going to the University of Florida when a mutual friend set them up on a blind date. They were married in 1953. Although she and Frank divorced in 1965, they remained great friends. Sylvia was an elementary school teacher in the Pinellas County school district until her 1st child was born in 1957. While taking a break from working outside the home she was busy working within the home with the birth of 3 more sons. She eventually went back to work teaching at the Pauline Rivkind Preschool of Congregation B’nai Israel and worked as a photographer taking school pictures. She obtained her Realtor license and worked for Drew Realty. She finished her varied career working at the Ellen’s Hallmark store in S. Pasadena until she was 80+ years old. Not content to sit at home, she started volunteering at Menorah Manor in St. Petersburg, Florida. Sylvia was insatiably curious about how things worked and often took things apart to repair them. She helped her sons with various projects such as wiring a lamp and once took her sewing machine apart just so she would know how to put it together again should the need arise. She loved jigsaw puzzles and bingo and kept her mind sharp solving crossword puzzles and watching Jeopardy. She was a talented seamstress making a lot of her own clothing as a young woman. She enjoyed reading books about nature and non-fiction. The love of her life was a 75 lb greyhound rescue named Hercules who she joked “bossed her around” (it wasn’t a joke, he did). She also enjoyed watching the birds and squirrels at the 3 feeders in the front yard. She was known to go outside to chase off “bully” squirrels or blue jays. She had an open heart and helped many people over the years going out of her way to give them rides or generously sharing whatever she had, financial or otherwise. Many people over the years were invited to share in the fruit from her loquat tree in her front yard including people that stopped off the street to see if she would share. She welcomed them back again and again. Her sassiness and independent spirit was a source of frustration at times, but also inspiration. She was an amazing woman and dealt with obstacles in life with an unparalleled stoicism, and she left this life on her terms. She was predeceased by her parents and her biological father, her brothers, Franklin Philip “Phil”, Jr. and Charles “Charlie” Blake. She is survived by her 4 beloved sons, Mark (Nicki), Richard, Jon (Jamie), and Michael (Becky), her sister Cynthia (Jim) and brother Jon, 9 grandchildren: Kevin, Michael, Valerie, JoAnn, Susin, Josh, John, Katie, Jeremy and Rachel, 18 great-grandchildren, and many other relatives and friends who loved her dearly. Family requests that in lieu of flowers donations can be made in Sylvia's name to the SPCA of Tampa Bay, 9099 130th Avenue North, Largo, FL 33773.

Sylvia Anne Maddalena, age 90, passed peacefully from this life on August 23rd at Palms of Pasadena hospital in St. Petersburg after a short illness. She was born on July 2nd, 1928 in Cambridge, Massachusetts to Mary Selma Blake and Franklin... View Obituary & Service Information

The family of Sylvia Anne Maddalena created this Life Tributes page to make it easy to share your memories.

Send flowers to the Maddalena family.