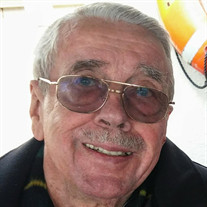 Stuart Walker Speed died peacefully on Monday, August 28, 2017 in the Hospice at C.W.Young Medical Center in St Petersburg, Florida following a brief illness. Stu leaves his wife of 25 years, Eleanor Rojcewicz Speed and their children: Lynne Fenton, Heidi Noack, Michelle Cyr, Aimee Tonneson and Eddie Cyr. Stu enjoyed 8 grandchildren: Kayleigh, Kelin, Karly, Lia, Kendra, Olivia, Avery and Hadley. He also predeceases his brother Curtis Speed and his wife Marilyn, nephews, cousins and dear friends. Born in Willoughby, Ohio, the son of Andrew and Helene Speed, Stu spent all of his younger years in Wellesley Hills, Massachusetts. He graduated from Gamaliel Bradford Senior High School in 1956. He attended Boston University for one year to study engineering when he decided to transfer to Babson College where he earned a Bachelor of Science in Business Administration in 1960. While in high school Stu particularly excelled in competitive swimming. His specialty was the breast stroke. He continued his competitive swimming at Babson and was recruited for the Army swim team while serving at Fort Bragg, N.C. His army career began when he volunteered for the National Guard in Massachusetts. Soon he was called to active duty and served until 1966. Stu was honorably discharged on February 28, 1966. Stu’s work life began as a traveling salesman for Rust Craft Greeting Cards. A position he thoroughly enjoyed. He traveled the country becoming familiar with interesting people and places. The company was based in Boston, a place he became all too familiar with. As the card business moved into the 21st century the glamour of being on the road lessened. He sought out a managerial position and was hired by Dennison Manufacturing, now Avery Dennison, and helped ensure that the sequential bar code system became a permanent fixture in the world of retail. As a Life Endowment member of the NRA and recipient of NRA’s Defender of Freedom Award in 2017, Stu revealed his appreciation for the arts of hunting, competitive shooting and conservation. Stu received his first rifle, the Daisy model 25 BB gun, from his beloved uncle, Capt. Archibald Speed, who later died heroicly in France just before the Normandy invasion in 1944. This started his love affair with all things gun. Even his artistic abilities were highlighted by a black and white sketch called “American Pistols/Revolvers 1840-1880” which earned him a scholarship to the Boston Museum of Art Summer Workshop during his high school tenure. Stu’s love of the outdoors enticed him to volunteer on the state level with the Massachusetts Fish and Game. He was also involved on the local level with the Natick Fish and Game and then the Marlboro Fish and Game in Massachusetts. Here in Florida he advocated for our wonderful park system and took the time to visit many of them, especially the Veterans’ War Memorial Park. The outdoors was his haven. Military service was an important presence in Stu’s life. Here in Florida he joined American Legion 273 and later American Legion 252 and was a frequent visitor at VFW 9272. At these gathering places Stu enjoyed the company of like-minded men. Together they shared their stories and abilities and created a home away from home where friendship and peace of mind was most important to all. Stu’s last wish was to visit the Tiki Bar at AL 273. With the support of the CLC, he did so on Aug. 24, 2017 accompanied by family and friends. The family thanks the Bay Pines Veterans Administration Health Care System, particularly the Community Living Center and Hospice for the wonderful care he received. His life was blessed. Donations may be made in the name of Stuart W. Speed to the Bay Pines VAHCS. In memo please clarify it is to be designated for Community Living Center (CLC) and/or Hospice. Godspeed.

The family of Stuart Walker Speed created this Life Tributes page to make it easy to share your memories.

Send flowers to the Speed family.