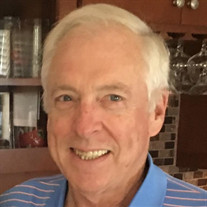 Robert “Rojer” James Atkin, Jr., of St. Petersburg, Florida, passed away peacefully at the Bay Pines VA Hospice on July 23, 2019. He was preceded by his wonderful parents, Robert “Duke” James Atkin and Jerrie Werber Atkin. Born in Lake Charles, Louisiana, on March 26, 1945, Rojer had a great childhood and was exposed to everything. His father worked as an executive with Sears in Chicago, Illinois, and his mother was a newspaper columnist. Rojer attended Horace Mann School in Gary, Indiana—the same school his mother attended—and graduated in 1963. He was heavily involved in sports and played for many years on the Mannbridge Little League team. He also had a newspaper route, was a decorated Boy Scout, and attended every football and baseball game he could (Go Cubs!). Rojer went on to attend Tulane University, where he was named a True Gentleman with the Sigma Alpha Epsilon fraternity. He also attended Indiana University and was a passionate Hoosier basketball fan throughout his life. There were many nights his children were kept up well past their bedtime, as a result of his loud cheering for his fellow Hoosiers during the NCAA championship games. Rojer was drafted into the Army in 1969, graduated from boot camp at the top of his class, and was given the rank of Staff Sergeant. He earned a Bronze Star and declined a Purple Heart, while serving in Cambodia and Vietnam with the 32nd Field Artillery Regiment. Rojer had a love for carpentry and working with wood, and built elaborate, large-scale staircases that were featured in magazines. There was nothing he couldn’t fix. He also loved officiating football games, birdwatching, playing craps, photography, watching Jeopardy, and anything sports-related. (Even curling piqued his interest.) Rojer is survived by his two daughters, Chelsey Marie Thomas of Vienna, Virginia, and Annsley Atkin Van Buskirk of St. Petersburg, Florida; brother Donald Scott Atkin of N. Kingstown, Rhode Island; sister Bonnie Kate Atkin of Roanoke, Virginia; and his grandchildren, Michael Douglas Pearce, Jr. and Christina Diana Pearce of Hudson, Florida, and James Malcom Campbell and Lydia Marie Campbell of Vienna, Virginia. Rojer will receive full military honors and be interred at Bay Pines National Cemetery in St. Petersburg, Florida on August 16, 2019, at 1pm. There will be a reception following the service at a private residence, and we welcome you to share any stories about our beloved father, brother, and grandfather. In lieu of flowers, a donation may be made to the Bay Pines VA Hospice, General Post Fund #1086 (https://www.baypines.va.gov/BAYPINES/giving/donate.asp).

The family of Robert James "Rojer" Atkin Jr. created this Life Tributes page to make it easy to share your memories.

Send flowers to the Atkin family.