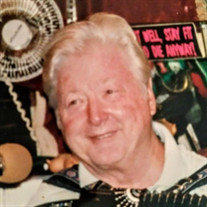 Richard (Dick) Watkins moved to Florida with his parents, Charlie & Alma Watkins and his sister June in 1948 at 17 years old. In 1949 he graduated from St. Petersburg High School. After high school he attended St. Petersburg Junior College. He also worked part-time at his parent’s restaurant “Charlie’s Beach Restaurant” located on St. Pete Beach where some of the Yankees and Cardinals, including Joe DiMaggio would frequent. Next Dick joined the Navy. After the Navy, he became a manager at a toy store. Sometime later he became part of the Merchant Marines and soon was operating a crane on the Martha Mac (a large ship). About 5 years later he worked for the Space Program at ECI in the Tyrone area of St. Petersburg, while working part time at the Oasis. It was at this time he realized his heart and his real desire was to be an entertainer. He started full time at the Oasis learning everything from his parents, from cleaning to ordering, managing and entertaining. Dick learned the accordion as a young boy and loved entertaining. At the Oasis, you could be the star. They started with Jam Sessions on Sunday nights and eventually it was Tuesday thru Sunday if you had a talent, telling jokes or stories, could sing or play an instrument or even whistle a tune, you would be called to come on stage. Entertainers from all over came to the Oasis. Dick would remember you by name and where you were from the next time you visited, even if it wasn’t until the next year (snowbirds). Tourists from all around the world visited the Oasis. The Oasis was a family affair, June and her husband John Foley worked there part time for many years too. The Watkins family became friends, almost family with many customers. They would get together for trips, pool parties and all sorts of fun. Dick recently told his daughter that he "had the time of his life working at the Oasis". Thank you to all of the customers and entertainers over the years that helped make that true. He was a wonderful man, son, brother, husband and father. He will be missed by so many. Dick was married to Margie for almost 51 years before she passed last year. He is survived by daughter, Debbie Barnard (Jeff), granddaughter, Noelle Azarelo (Jim), sister, June Foley, nieces, Christine Dawson (Mark), Charlene Scott (Tom) and nephews, John and Dennis Foley. The most important thing he did was pray and ask Jesus Christ into his heart. (The Bible says: Jesus answered and said unto him, Verily, verily, I say unto thee, Except a man be born again, he cannot see the kingdom of God. John 3:3) Our family now has confidence he is in heaven, where we look forward to our reunion. Dad, we love you so much and will miss you, your sparkly blue eyes, elf-ish smile and your sweet spirit.

The family of Richard Charles Watkins created this Life Tributes page to make it easy to share your memories.

Richard (Dick) Watkins moved to Florida with his parents, Charlie...

Send flowers to the Watkins family.