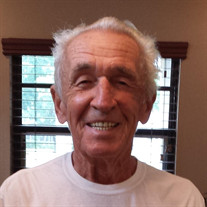 Richard “Pappy” Cook, 81, of Port Richey, FL, passed away at 2:53 PM on Thursday, January 1, 2015 due to complications of cancer. His passing was as he wanted, at Hospice, peaceful, surrounded by family. Pappy is survived by his wife of 63 years, Pat, daughters Joanne and husband Eddie, Linda and husband Greg, sons Jim and wife Judy, Rich and wife Joanna. Pappy also left behind granddaughter Angie, husband Jamie and great grandsons, Moshe and Malachi. Pappy also left a bevy of friends and customers whom he loved dearly! Pappy’s parents emigrated from Italy and settled near Pittsburgh, Pa. His father worked in the coal mines while his mother stayed home to raise 10 children. Pappy, the youngest child, was born in Sewickly, Pa just outside of Pittsburgh. He attended school and joined the Navy during the Korean War. After an honorable discharge Pappy married Pat and began his own family. Pappy then joined the Pittsburgh Police Department where he served for a short time. As you can imagine, he was a huge Pittsburgh Steelers fan!! He always dreamed of warm weather and decided to move his family to Florida. The family landed in the St. Petersburg/Clearwater area where he found his way into the produce industry. Pappy worked at his final market (Tomato Kingdom) in Port Richey until his illness would not allow him to continue. In his later years, Pappy really enjoyed new technology. He bought several electronic devices but ended up primarily using his hi-tech smart phone. He loved listening to talk radio, googling subjects and learning the ins and outs of all its functions. Trouble was, he had to blast the volume to hear it due to his hard of hearing!! Pappy was amazing, this 81 year old man, who did not know his lungs were sick, for the most part, worked Tomato Kingdom by himself. Over several years Pappy would drive to Hillsborough and Plant City (at various times with his bull dogs, Muggs and Molly and later on with his Chihuahua Tammy, and Molly, his miniature Dachshund). Customers loved to see all of his babies when they shopped at the market. Something interesting began to happen with Pappy as he continued to work his market. His wanting to spend time with family and do simple things together increased. Pappy even wanted to attend a “Chicago” band concert at Ruth Eckerd Hall. Not only did he go, he greatly enjoyed it. He loved the experience so much he saw them again when they came back around to Ruth Eckerd Hall. His son-in-law, Greg, enjoyed watching Pappy’s face light up as he marveled at the band’s energy and talent. Pappy was having so much fun and was looking how he could get more out of life, especially with his family. Pappy soon noticed he was not feeling well and thought he had a cold. He went to the doctor’s to see about the issue. From there Pappy realized the severity of his condition. Pappy began his many travels to tests and other appointments. His health finally would not allow him to work anymore. He also knew he could not provide proper care for his four legged babies - Tammy and Molly. Both found wonderful, loving homes which filled Pappy with joy. There came a time when Pappy was asked if he knew where he would spend eternity when he passed away. Pappy was not angered at the question, but was very interested in talking about his beliefs and his passing. He did not shy away from any discussions and was even very okay with re-citing the sinner’s prayer. Pappy was a saved man and had peace with the path in front of him. One day we noticed Pappy was not listening to his talk radio or watching TV anymore. When asked, Pappy said, “not important.” He would go on to say nothing here is really important except that EVERYONE needs to know about Jesus and to accept Him into their hearts! Pappy was GREATLY affected by all of the wonderful friends and customers he had. Love and prayers from so many of you provided peace and comfort to both Pappy and his family. Pappy was generous, kind, and a man who knew what he wanted. He was courageous to the end, and modeled to us all what it means to “finish the race strong!” Although we mourn his passing and will miss him so very much, we share tears of joy knowing he is with his Lord and Savior! We are blessed to have known you Pappy, Boo Boo, Rich Cook!!! Pappy’s remains are going to be set out at sea. Pappy will be transported locally out to sea by a United States Coast Guard vessel. At a prescribed location, a ceremony will take place with all hands participating. Once the event has been completed, family members will be provided the date, time, and longitude and latitude details of the ceremony. God rest your soul Richard E., “Pappy”, “Boo Boo” Cook! The family request that in lieu of flowers that a donation be made, in the name of Pappy, to Suncoast Hospice, 5771 Roosevelt Boulevard, Clearwater, FL 33760

The family of Richard E. "Pappy", "Boo, Boo" Cook created this Life Tributes page to make it easy to share your memories.

Send flowers to the Cook family.