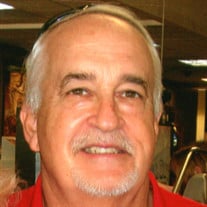 Born in Pawtucket, Rhode Island on March 14, 1946, Paul Edward Thibodeau was the son and fourth child of the late Marcel Mauriel Thibodeau and Gabrielle (Gagne) Thibodeau. After graduating from Notre Dame in the Class of 1967, he started a twenty-year career with Firestone in Akron, Ohio. While working there he earned a law degree from Akron University in 1977 and raised two sons with Cheryl Nadine Thibodeau. He went on to build a successful career as an executive helping large companies build and deliver superior service in call centers. He was an advocate for consumer’s rights. Paul followed his career to San Diego, California, Lawrence, Kansas and finally landed in Saint Petersburg, Florida where he met his bride Sharon M. Thibodeau (Hanson). He is survived by his wife of fourteen years, Sharon, and his two sons, Curtis Nathan Thibodeau (wife Shelly) of Elizabethtown, Kentucky and Mark Alan Thibodeau of Dallas, Texas. Other survivors include his sisters Elaine Morel, husband Fred and their three children Adam, Glenn and Elvis Ryan; Rita Forte, husband Nick, Rita’s children Steve, Karen and Diane; as well as his late sister’s children, Paul, Christian and Scott. Stepchildren include Trevor and Jessica Hanson and Trisha and Brian Olson. He was blessed with seven grandchildren, Kevin and Megan Thibodeau, Brendan, Brooke and Bailey Olson and Alana and Adrian Hanson. Paul’s priority and happiness in life came from time with family. Whether it was playing and singing with his grandchildren, quality time visiting with his children or being a nurturing husband, he made sure his focus was everyone else’s health, happiness and well being. He was a lover of animals, especially dogs. This was demonstrated by his volunteer work at the S.P.C.A. and the never-ending supply of peanuts for the yard squirrels. He was an avid reader of books from any genre and kept up on current events. Classic movies were his preference when it came time for television and while it seemed they all had some sort of classic scene, Casablanca was his favorite. Since his favorite toys were cars, he drove many fun automobiles in his lifetime. Per Paul’s wish, a Celebration of Life will be held at The Double Tree Beach Resort on North Redington Beach on Saturday, May 19, 2018 starting at 4:30 p.m.. Those wishing to share happy memories, stories or simply pay respects are invited. If unable to attend, please email Mark any material you would like to share at [email protected] . In lieu of flowers, the family requests that memorial contributions be made to Moffitt Cancer Center Foundation. Donations can be made by mailing a check to 12092 Magnolia Drive MBC-Found, Tampa, Florida 33612, or by calling 1-800-456-3434 extension 1403, or online at www.moffitt.org/giving . Please make a note that your donation is in memory of Paul Thibodeau.

Born in Pawtucket, Rhode Island on March 14, 1946, Paul Edward Thibodeau was the son and fourth child of the late Marcel Mauriel Thibodeau and Gabrielle (Gagne) Thibodeau. After graduating from Notre Dame in the Class of 1967, he started a twenty-year... View Obituary & Service Information

The family of Paul Edward Thibodeau created this Life Tributes page to make it easy to share your memories.

Send flowers to the Thibodeau family.