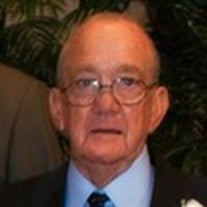 Paul Ray Hubbard, 89, of Clearwater, Florida passed away on July 4, 2019 at Largo Medical Center in Largo, Florida. Paul is survived by his wife Georgia of 64 years, sons Delbert Glenn Hubbard (Brenda) of Indian Shores, Florida and Robert Alan Hubbard (Allison) of Atlanta, Georgia, 4 grandchildren, Bradley Alan Hubbard (Ali) of Tampa, Florida and Mallory Elyse Hubbard of Oldsmar, Florida, Mills Carter Hubbard and Samantha Grace Hubbard, both of Atlanta, Georgia as well as 2 great grandchildren, Garion Brann Hubbard and Lacey Anna Hubbard both of Tampa, Florida. Paul was a loving father, husband, grandfather, and friend to everyone. Paul was born on September 11, 1929 near Florence, Alabama to Cecil Lee and Sarah Elizabeth (Liles) Hubbard and was the oldest of eight children. He was preceded in death by his parents, 2 brothers, Kenneth David (Butch) and Scott Pruitt, and 3 sisters, Joyce Ann Terry, Janice Gail Love and Peggy Jean Hubbard all of Florence, Alabama. He is survived by two brothers, Cecil Lee, Jr. (CL) and Ronald Jerry, both also of Florence, Alabama He attended Central High School in Florence and served in the Army from 1948 to 1952, primarily in Wake and Guam. After his honorable discharge from the Army he moved to the South Bend, Indiana area where he met and married his wife Georgia in 1954. In 1970 Paul, his wife and sons moved to Bradenton, Florida where he was a carpenter until his retirement from Tropicana in 1991. Since 1993 Paul and Georgia have lived in Clearwater, Florida. At the request of the family there will be no funeral services.

The family of Paul Ray Hubbard created this Life Tributes page to make it easy to share your memories.

Paul Ray Hubbard, 89, of Clearwater, Florida passed away on July...

Send flowers to the Hubbard family.