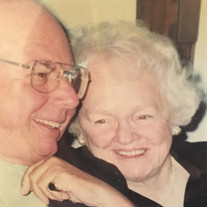 Patricia Josephine McDermott Buccigrossi March 14, 1932 – March 13, 2018 Patricia Buccigrossi passed away on Tuesday, March 13, 2018, surrounded by her family and friends. Her youngest daughter Mary Patricia Buccigrossi and her partner Pete Lundy, her son Jim Buccigrossi, her oldest daughter Joan Buccigrossi and her partner Duane Hubeler, and her nephew Robert Tosner and his partner Gregg Moore remember her with love and affection. Her beloved husband, Jack, her oldest son, John Michael, and her sister Eileen Tosner, have all gone before her and we hope they are together now. During Pat’s long illness, countless family members, friends, neighbors and her children’s friends reached out to her with cards, flowers, gifts, phone calls, texts and prayers. She appreciated every gesture of love and support. Pat was well loved and admired. She was a good friend to those she had known all her life, as well as those she just met. She always took the time to listen to someone’s life story and often shared her own. Her life has been an inspiration to many. Pat was the born to Harry McDermott and Nora O’Connor, who immigrated to the United States from Ireland. She grew up in Queens, New York with her parents and three siblings, Eileen, Tom, and Catherine. She married John (Jack) L. Buccigrossi in January of 1953, in Queens, NY. They made their home in Wantagh, N.Y. and raised their four children, Michael, Joan, Jim and Mary. In 1964, Jack received a work transfer from the Associated Press and they relocated to Nassau, NY. Soon after moving to the Albany area, the family was involved in a car accident in which Pat sustained a spinal cord injury, leaving her a paraplegic. She was hospitalized and then in rehab for nearly a year, while the children were sent to stay with family members. In rehab, she learned to stand on braces while leaning against a counter, because she did not have enough balance to use crutches. One night in the kitchen of the rehab center, a nurse found her standing on her braces baking chocolate chip cookies. When the nurse asked her what she was doing she said, “You didn’t teach me what I needed to know today. I have 4 young children; I need to know how to take hot cookies out of an oven while balancing on these braces.” After completing rehab and returning home to her family, she became an advocate for people with disabilities. Her injury happened over 25 years before the Americans with Disabilities Act (ADA) become law. She was a founding member of a group called Wheels to Independence, a group that helped her to re-learn to drive and put her wheelchair into the car by herself and well as establishing handicapped parking spaces. Eventually the group helped to pass the ADA legislation that ensured that she and others with disabilities would not face discrimination. Jack and Pat never lost touch with their many friends from the NYC area. The big farmhouse on the hill was a beloved destination for family and friends for many happy years. The house hosted 5, 10, 15 guests at a time, children running up the front staircase and down the back while the grownups gathered at the kitchen table. Pat served wonderful meals for countless guests, including her famous chocolate chip cookies. Visits to house on the hill often included football games on the front lawn, apple picking in the nearby orchards, fishing in the creek and riding the zip line from the treehouse that Jack built in the backyard. Pat returned to work as a bookkeeper, employed by the University of New York at Albany for over 10 years. She received a Distinguished Service award during her career there. After Jack retired, they traveled all over the United States together. They especially enjoyed visiting the National Parks. While on a visit to John and Helen Phillips in Largo Florida, they fell in love with the view of the Gulf of Mexico and the Intracoastal Waterway from their condominium and purchase one with the same view right down the hall. Together, the two couples were the center of a vibrant and fun-loving social group in the building. Their parties are legendary. Pat requested that a memorial mass be held for her at St. Jerome’s Catholic Church, 10895 Hamlin Blvd., Largo, Florida FL 3374 on Saturday, March 17th at 10 am. Her ashes will be buried with her husband Jack and her son Michael at St. Mary’s Cemetery in Nassau, NY. The burial will take place later this year. During her last days, Pat received loving care from the wonderful people at Suncoast Hospice Empath Health, 5771 Roosevelt Blvd., Clearwater, FL 33760. We would be pleased with a donation to this chapter of Hospice, your local chapter or any charity close to your heart. In addition, her family would love to hear your favorite memories of Pat. This website will become a wonderful collection of memories and a lasting tribute to a life well lived. Thank you, Mary & Pete, Jim, Joan & Duane, Rob & Gregg

The family of Patricia Josephine Buccigrossi created this Life Tributes page to make it easy to share your memories.

Send flowers to the Buccigrossi family.