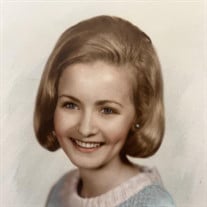 Ouida Faye Welch, daughter of Nolan and Ouida, was born and raised in Franklinton, LA, (1.5 hrs north of New Orleans) in their modest family-built home on Lee Street. She had one brother, Paul, who was 8 years older. Even though their family... View Obituary & Service Information

The family of Ouida W. Gramlich created this Life Tributes page to make it easy to share your memories.

Ouida Faye Welch, daughter of Nolan and Ouida, was born and raised...

Send flowers to the Gramlich family.