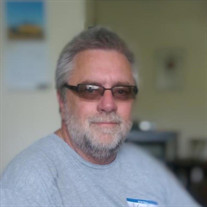 Age 62, died peacefully in the arms of his wife on Thursday May 14th, 2020 at their home in St. Petersburg, FL after a hard-fought battle with cancer. Mark was born on May 18th, 1957 in Laporte, IN to Willard and Sarah Clausen. As a small child, the Clausen family moved to Chicago Heights where his father quickly made a Cubs fan out of Mark. Mark would often recollect how he eagerly listened to every play the Cubs made, while Harry Caray broadcasted the games over the radio. He was sure to watch the first home opener game every year and continued that beloved tradition into adulthood. Mark’s older brother, Gary relocated to Florida after completing his tour of duty in Vietnam to pursue a career with Disney. Gary quickly fell in love with the West coast and set up shop in Pinellas County and Mark surely followed. He arrived during the Summer of ‘76, fully immersing in his new Florida lifestyle. Mark soaked up rays in the Sunshine State and loved to compete in amateur softball tournaments or play a quick pick up game of basketball. Together, Mark and Gary fulfilled their lifelong dream of opening up a family owned and run company together in ‘87. Mark became a well known and beloved member of the local St. Petersburg community, with his family-style approach to providing his company’s moving services to all. He proudly wore his company’s logo for decades. Mark was a loving father to three beautiful children Brett, Josh, and Monica. He proudly boasted about his kids and they could often be seen clambering about at the warehouse in the early years of his company’s founding. In 1993, Mark met the love of his life, Cindy Lee Campbell and he knew from the moment he saw her that they were meant to be. They sealed their love on the 4th of July, and said ‘I do’ amongst the glowing fireworks and stars. Mark and Cindy became a big blended family of seven, where he happily embraced his two new sons Anthony and Daniel. Despite nearly 27 years of marriage, Mark never missed the opportunity to show Cindy that his love for her was wholly irrevocable. Mark is remembered and held near by his wife, five children, nine grandchildren, mother, and numerous other family members. In the end, we all become stories. Ashes to ashes, dust to dust, words to words. Mark Steven Clausen will always be remembered as a jubilant family man and devoted husband. His love of helping others will never be forgotten. Mark never shied away from a tough challenge and dug his heels in to push through until the very end. He will live on in the hearts and memories of those he shared his life with. To honor Mark’s lifelong generosity, we ask that you do an unexpected act of kindness for someone who needs it.

Age 62, died peacefully in the arms of his wife on Thursday May 14th, 2020 at their home in St. Petersburg, FL after a hard-fought battle with cancer. Mark was born on May 18th, 1957 in Laporte, IN to Willard and Sarah Clausen. As a small child,... View Obituary & Service Information

The family of Mark Clausen created this Life Tributes page to make it easy to share your memories.

Age 62, died peacefully in the arms of his wife on Thursday May...

Send flowers to the Clausen family.