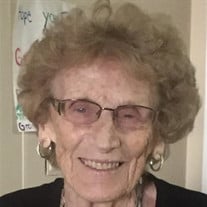 Margaret "Peggy" McCarty, 90, of Largo, died peacefully, surrounded by family, on February 6, 2018. Peggy was born in Cincinnati, OH on Oct. 17, 1927 to Paul and Loretta O’Brien. She married George Edward on May 14, 1949. Peggy was preceded in death by her husband, George (1926-1992). She is survived by her nine children Kevin (Pamela), Mary (Louis), Galen, Maura (Ken), Michael (Melanie), Mark (Ann), Maggie (Gregg), Monica (Doug), and Joe (Sharon), her grandchildren, James (Sapna), Erik (Leila), Molly (Tim), Nicholas, Michael (Joel), Elizabeth, Sean (Christine), Patrick, Lauren, Paige, Bryan (Danielle), Robert (Pippi), Kate, Chelsea (Ryan), Natalie, Kyle, Ally, Brennan, Roxanne, and her great grandchildren Clayton (Shannon), Sulek, Tejal, Jasper, Rigel, Rachel, Heartley, Oliver, Jackson, Matthew and Wednesday. Peggy worked in real estate in the 1970s and as a nurse at Suncoast Hospital in Largo. Peggy joined St. Patrick’s Catholic Church in Largo in 1968 where she volunteered tirelessly to help others and made many lifelong friends. She will be fondly remembered for her eternally optimistic spirit, her love of life and nature, and her faith in God. Peggy was most proud of her family and never failed to mention to anyone she met that she had 9 children. She will be missed by all who knew her.

The family of Margaret Loretto McCarty created this Life Tributes page to make it easy to share your memories.

Send flowers to the McCarty family.