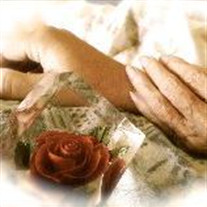 Loy's Life The text on my phone from mom's roommate said “I think you need to come back”. The early afternoon sky looking out from her balcony was gloomy, soft and very quiet, and when they came to take her away, it started to rain lightly, like tears … Loy Kolar died peacefully at 92 on August 28th, at her home with me and her roommate LaVonne. LaVonne, whose mother died just a few months before moving in with mom, came into her life for her to have a little guidance and company, but she was very independent otherwise. She was preceded in death by her husband James Kolar, born in the Ukraine, who passed away in 1985 in Clearwater. I, Peter Kolar, was her only child. Dad and Mom fled Czechoslovakia in their twenties (now the Czech Republic) for a brighter future away from communism. Mom's family had their own flour mill on many hectares (acres) of land. They would entertain locals and travelers with dining, dancing and music at their restaurant. Their home was above the restaurant. The stories of the trail of adventures of how they made it out of Europe into Australia as refugees in 1949 was attempted by mom many a times, but she always digressed. In return for their stay in Australia they were required to work in whatever jobs the government gave them. Mom had the privilege of being the waitress for Audrey Hepburn while working one of these jobs. After several years they finally received their papers to travel abroad, entering the US via Canada in 1956 arriving in San Francisco. I was born in Hollywood CA, not far from the famous sign a few years later. They called several cities in California, Oregon and Illinois their home, while 'Flipping Houses'. They saved enough money to buy their first fixer upper when they arrived by managing apartment complexes and just kept moving up. Dad did the painting inside and out (I learned the word linoleum at a young age and was proud of it) while mom decorated inside, landscaping outside. She always worked 2 jobs and kept me active in just about everything. Dad was also a salesman. When he was not fixing a house, he had guitars and just about everything you can think of in his Chevy Impala trunk to sell to you. Anyway, one property they bought wasn't a house, it was a motel in Lake Tahoe via my Godparents. I have fond memories there, high school and all. Florida came after the sale of the motel, but not until a home in Concord found them, followed by one in Chicago and then their last one here in Clearwater. I digress too. After my father's passing, Mom's passion was ballroom dancing, followed closely by traveling to other countries, which she mainly funded by hostessing lunches in restaurants up and down the Barrier Islands. She specialized doing hostels when traveling – she enjoyed the younger crowd. She usually would say to management that she had an emergency with a family member in Europe that needed her attention, but that was her 1 week notice. Some of her famous expressions were “I have more guts than brains”, “I used to be young and beautiful and now I'm just beautiful” and my favorites were when we went out for what she called a “bite to eat” but mainly she wanted to go out and be with people . . . “how much for a full glass” usually followed by “my life is too bitter, I need something sweet”. She spoiled family and friends with amazing Czech recipes, as Anthony Bourdain once famously said, “In Prague, pork is king welcome to Porkopolis, the land that vegetables forgot. .....” A minute would not go by after entering her home before you had a unique beverage or something delicious would come out of the kitchen. Her various custom Christmas cookies were talked about constantly and in some cases hoarded. Her French Cognac homemade eggnog was absolutely outstanding. Since Loy was not a common name, she would tell people to think of Myrna Loy, a past American actress. One gentlemen, Jim, always called her Myrna. God has a way of giving us peace knowing our loved ones are at peace. She had a great life. She knew she was loved! She gave love freely and enjoyed life. Life is good, make the best of it, which she did. Thank you Hospice for being there for both my father and mother. Loy, Myrna, Mom, you will be missed . . . . .

Loy's Life The text on my phone from mom's roommate said &#8220;I think you need to come back&#8221;. The early afternoon sky looking out from her balcony was gloomy, soft and very quiet, and when they came to take her away, it started to... View Obituary & Service Information

The family of Loy Kolar created this Life Tributes page to make it easy to share your memories.

Send flowers to the Kolar family.