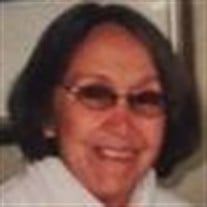 Louise Kern Schmidt was born April 27 1924, to know, love and serve God in this world and on January 27 2016 went to be happy with Him in the next. A resident of Tampa FL since 1974, she was born and raised by her parents Henry and Mary Fredericks in St. Louis MO, to be a Catholic and a Democrat. She practiced those professions with fierce and independent determination. Louise is survived by her husband, Paul J Schmidt; son Damien of Valrico FL; daughter Maria (O’Connell) of Arlington VA; grandchildren: Damien Schmidt Jr, Alexandria Schmidt, Edward O’Connell, and her brother Henry Fredericks of St. Louis MO. She accepted the earlier deaths of two sons, Thomas and Matthew, and her younger brother Robert, as a sign that all follow the path that God chooses. She leaves behind many loving nieces, nephews, and dear friends. With a degree from St. Louis University, Louise practiced her profession as Librarian of the Catholic Hospital Association and the St. Louis University School of Medicine, where she met her husband in 1948. Later, After their marriage in 1953, she lived in Washington DC area where she was a librarian at the National Institutes of Health Clinical Center. In those first years, she found time to fill a niche as an active member of a group of Catholic women intellectuals, wives of members of Congress and national columnists. An active and vocal worker for human rights since teenage, she marched in the 1960s for fair housing, education, and employment. After her most important career of mothering five children: born, adopted and foster; she accompanied her husband on national and international professional travels, making more friends. Recently, she was physically unable to even attend at her church. Entertainment of all, including those friends from all over the world, was at home. Death at peace was there, with her family. Now she looks forward to meeting and greeting all, as she said often, ‘When the saints come marching in’. A funeral Mass will be celebrated at 10 AM on Saturday, March 5 at Sacred Heart Catholic Church, downtown Tampa. Internment will be in Arlington National Cemetery, VA.

Louise Kern Schmidt was born April 27 1924, to know, love and serve God in this world and on January 27 2016 went to be happy with Him in the next. A resident of Tampa FL since 1974, she was born and raised by her parents Henry and Mary Fredericks... View Obituary & Service Information

The family of Louise Kern Schmidt created this Life Tributes page to make it easy to share your memories.

Send flowers to the Schmidt family.