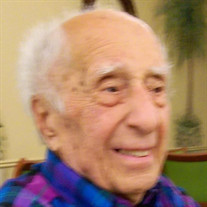 In Loving Memory of Louis Joseph Ferretti 9/13/1918 – 12/22/2016 Beloved Husband, Father, Grandfather, and Great Grandfather. Louis J. Ferretti born in Baltimore, Maryland, lived his adult years in suburban Philadelphia, where he and his loving wife Louise (his childhood sweetheart), raised 5 children. They spent their very happy retirement years together in Dunedin, FL, living near their eldest daughter. In January 2011, Louise took her place in heaven. She waited for him and he waited to be again, reunited with her. At the age of 98, Louis joined Louise for eternity on December 22, 2016. A letter found after his death, was written by Louis to Louise on October 16, 1941. Within that letter was the following prayer he wrote on that date in 1941, to his soon to be wife: Heavenly Father, up above, please protect the one I love. Keep her always Safe and Sound, no matter where She may be. Help her to see that I love her as well as she loves me. Then Dear Lord, help me to be the kind of fellow that She wants me to be. Help me now, help me forever, I can’t lose her if we work together. Louis leaves behind his loving family of 5 children, 9 grandchildren, and 13 great grandchildren. Louis lived for Louise and she for him throughout 69 years of marriage. They are both now interned together at the Calvary Catholic Cemetery in W. Conshohocken, PA.

The family of Louis Joseph Ferretti created this Life Tributes page to make it easy to share your memories.

Send flowers to the Ferretti family.