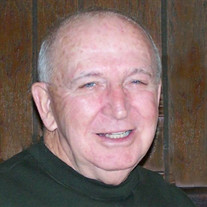 L. Robert (Bob) Lebo (October 25, 1934 – September 21, 2014) A beloved husband, father, and friend. Bob passed away at the Suncoast Hospice, Woodside Care Center in Pinellas Park, Fl. after a long battle with Parkinson's disease. Bob was one of 10 children born in Carlisle, Pa. to Clarence and Myrtle Gleim Lebo. From a young age Bob enjoyed all sports which continued throughout his life. His favorite teams were the Philadelphia Phillies, the Philadelphia Eagles and Penn State. In conjunction with his avid love of sports and his family, he also enjoyed the outdoors, working in his yard and garden, fishing off the Gulf Coast of Florida, as well as relaxing on the beach and watching the beautiful Florida sunsets. Bob was a graduate of Boiling Springs High School and Gettysburg College where he received a scholarship to play football. His love of history, sports, and keen skills with finance led him to successful careers in teaching history, coaching football, and a 34 yr. career as the Vice President of Finance with the Pennsylvania Dutch Candy Company in Mt. Holly Springs, Pa. Bob attended the Church of the Brethren in Mechanicsburg, Pa. and Gulf Coast Church in Largo, Fl. Bob was preceded in death by his wife of 48 yrs. Jo Ann Wolfe Lebo, and three brothers and three sisters. He is survived by daughters Barbara Massam (Bradley), Debra Calder (Jim), and Marci Baker (Jim), three grandchildren, Benjamin Massam, Jack and Madelyn Baker, as well as one brother, Thomas F., three sisters Grace Winters, Diane Altland and Phyllis Irwin, and numerous nieces and nephews. Bob is also survived by his 2nd wife, Carolyn Meals Lebo and her three daughters, Brenda Lankford, Debra Schmidt, Linda Bowie, one son Daniel, and 4 grandchildren, Aaron Bowie, Caroline and Christine Lankford, and Callie Schmidt. Bob's ever present sense of humor and infectious smile endeared many to Bob with creating numerous lasting friendships. Bob will be greatly missed! A private family memorial was held in his honor at Gulf Coast Church, Largo Fl. on Thursday September 25, 2014 to be followed by a Memorial service in Pennsylvania near the end of October 2014 at the Malpezzi Funeral Home, 8 Market Plaza Way, Mechanicsburg, Pa. Memorial contributions may be made to the Suncoast Hospice, 5771 Roosevelt Boulevard, Clearwater, Fl. 33760 designated for the Woodside Care Center, or the National Parkinson Foundation, P.O Box 5018, Hagerstown, Md. 21741.

The family of L. Robert (Bob) Lebo created this Life Tributes page to make it easy to share your memories.

Send flowers to the Lebo family.