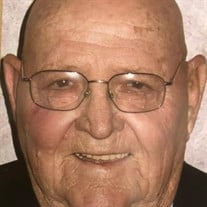 Johnny W. Bourlon &#8220;Pop&#8221;, passed away on Tuesday, July 17th at the age of 86 at the VA Medical Center at Bay Pines. He was born in Jones, Oklahoma. He retired from the United States Army Corps of Engineers after 20 faithful years... View Obituary & Service Information

The family of John W. Bourlon created this Life Tributes page to make it easy to share your memories.

Send flowers to the Bourlon family.