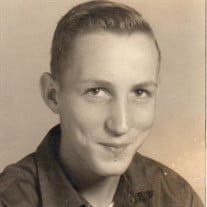 Jerry L. Collins was born, May 26th, 1944, in Huntington, West Virginia. Growing up in mostly foster care, Jerry graduated high school and served nearly 14 months in Vietnam as an honorable US Army Soldier. He ran many search and rescue missions, saving and helping anyone he could. A true American hero. Jerry later met Hazel “Jeanette”, a single mother, fell in love and married her. In earlier years, Jerry and Hazel enjoyed working flea markets together often bringing along their grandchildren who knew him best by the name of Pawpaw. Quite the funny prankster, Pawpaw enjoyed teasing his grandchildren by removing his false teeth and showing it to them when they least expected it. As silly natured as he was, he had a kind and generous heart. With strawberries always in his freezer, the question, “Do you have a cooler?” is remembered by those who knew him well. Those who didn’t have a cooler would receive a bag of goodies to take home. Jerry also volunteered at a hospice thrift store in Zephyrhills, Florida, where he collected trinkets he would share with family. His favorite collections were his cassette tapes, vinyl records, VHS tapes and cowboy boots. His favorite things to do included camping and fishing while relaxing with family at E.G. Simmons Park in Ruskin, Florida. Jerry Collins eventually retired from a successful career with General Electric. Jerry passed away peacefully into eternal rest with our heavenly Father on August 23, 2017, after a cumbersome battle with COPD. He was proceeded by his beloved wife, Hazel “Jeanette” Collins in 2013; his parents, and two brothers. He leaves his loving memories to be cherished by his; beloved son, Jerry L. Collins II, loving siblings, Bill Collins and Judy Lang; adoring stepdaughter, June Moody and stepsons, Jamie and Jerome Hayes, nine grandchildren, nineteen great-grandchildren and many friends. All love him dearly. A Military Honors Service will occur on Friday, September 22nd, 2017, 10am at Bay Pines National Cemetery,10000 Bay Pines Boulevard, St. Petersburg, FL 33708. Friends and relatives are invited. As we prepare to lay him to rest, let us remember - Our loss, heaven's gain. In lieu of flowers, memorial contributions may be made to Suncoast Hospice Care Center Mid Pinellas, 6770 102nd Ave N, Pinellas Park, FL 33782. Service is coordinated by Grasso Funeral Memorial and Cremation, 12515 Ulmerton Road, Largo, FL 33774, 727-223-4965.

The family of Jerry L Collins created this Life Tributes page to make it easy to share your memories.

Send flowers to the Collins family.