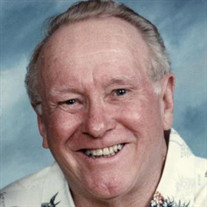 James William Huffman May 31st, 1934 – October 7th, 2019 Billy was born to Joseph Edward and Hellen Crawly in Lexington, Kentucky. At the age of 5 years, with his brother, Joseph and sister, Nancy, the family moved to St. Petersburg, Florida, where they all went to St. Paul’s Catholic grade and high school for 12 years. Billy married Helen Mansmann and have been together for 58 years. They have five children: Elaine Deja (Dennis), Elise Gilbert (Marc), Erik, Erin and proceeded in death by son, Evan. They have seven Grandchildren; Erica Yee (Austin), Lacie, Alyee, and Rhea Gilbert, Racheal Deja (Jeremy), and Owen and Peyton Huffman, followed by two great grandchildren, Ava Yee and Tucker Halenkamp; His sister Nancy (Driver, Gleason, John) and late brother Joseph (Jane Keresting) and many Nieces and Nephews. After graduation, he began working for G.T.E, where he worked during the day and attended college at night, earning his BA. Starting as a cable splicer, he worked his way through to upper management. After 32 years, he retired and continued working as a sub-contractor for Reltic and Marconi companies. During his time at G.T.E, he was chosen to work in Sao Paulo, Brazil, taking the family along. Needless to say, no one wanted to go at that time, and then no one wanted to return home. It was a very rewarding and educating experience. The children went to an American school and learned Portuguese, while Billy learned the business part, and Helen the domestic. They met and made many friends from many Countries and the USA states. Through the years, Billy and Helen met with the Beuchlers (Germany) and the Barthels (California). We wish everyone could experience living outside the Country, thus appreciating their own Country. Billy belonged on several committee’s and clubs; United Fund, Sertoma, Rotary, and the Romeo’s Club (Retired, Old, Men, Eating, Out) and twelve years as co-chairman for St. Paul’s HS class reunions. Billy and Helen belong to Blessed Sacrament Catholic Church and School, where they have been attending for 52 years. Some of his hobbies included dealing in the Stock Market, reading, traveling, poker, and watching College Football. He loved racquet ball, bowling, tennis, and golf, or as I would say, chasing the ball. He had a great sense of humor, thus, liking to hear and tell a good joke. His fellow employees said he was a tough boss, but was fun to be around. Billy enjoyed life, his family and friends, and was there to brighten their lives. He will be missed dearly, but will be in our hearts forever. Funeral services will be on October 24that 11:30, Blessed Sacrament Catholic Church, Seminole Fl., followed by a celebration of life at 5 Towns Condominiums. In Lieu of flowers, please make a donation to Alzheimer’s Foundation or Hospice.

James William Huffman May 31st, 1934 &#8211; October 7th, 2019 Billy was born to Joseph Edward and Hellen Crawly in Lexington, Kentucky. At the age of 5 years, with his brother, Joseph and sister, Nancy, the family moved to St. Petersburg, Florida,... View Obituary & Service Information

The family of James William Huffman created this Life Tributes page to make it easy to share your memories.

Send flowers to the Huffman family.