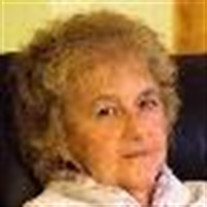 Gloria J. Hopper Kershbaumer Ward, 71 of Largo, FL was called home to her heavenly father late Saturday July 25, 2015. She was born December 26, 1942 in Bloomsburg. A daughter of the late Donald and June Larish Hopper. She was a homemaker and caregiver for most of her life. Gloria was also a member of St. Columba Roman Catholic Church of Bloomsburg. She was a lifelong resident of Almedia before residing in Largo, FL with her Fiancée. Some of her favorite things to do were to spend time with her family and friends, camping, traveling, going boating and to the beach and also going to the casino and going to yard sales. In addition to her parents, she is proceeded in death by her brother Charles Larry Hopper, her sister Pauline Herring and a step-sister Diane Myslowski and a nephew Charles “Butch” Hopper. Gloria is survived by her Fiancée Bob Regal, daughter Karen Crawford and husband Larry of Benton, a son Joseph Kershbaumer and wife Brandy of Berwick, and a daughter Heidi Overton and husband Robert of Knoxville TN. She is also survived by her grandchildren Larry “Bear” and Izabella Crawford, Samantha Kershbaumer and Haley and Bethanna Perkins. In addition she is also survived by one sister, Judy Evans of Almedia and four brothers, Elmer L. Hopper and wife Jane, Terry L. Hopper and wife Dottie all of Berwick, Robert G. Hopper and wife Jane, Jerry L. Hopper all of Almedia. She also leaves behind many nieces and nephews. A mass of Christian burial will be celebrated on Friday August 7th at 1:00 pm, from St. Columba Roman Catholic Church, 342 Iron St., Bloomsburg, PA with Monsignor Robert E. Lawrence as celebrant. Burial will be at New Rosemont, Espy. Flowers may be delivered to the church for the Funeral of Gloria Ward.

Gloria J. Hopper Kershbaumer Ward, 71 of Largo, FL was called home to her heavenly father late Saturday July 25, 2015. She was born December 26, 1942 in Bloomsburg. A daughter of the late Donald and June Larish Hopper. She was a homemaker and... View Obituary & Service Information

The family of Gloria Jean Ward created this Life Tributes page to make it easy to share your memories.

Send flowers to the Ward family.