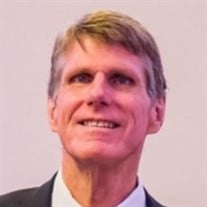 Gerard Joseph Pickhardt of St. Petersburg, FL went to be with his Heavenly Father on March 19, 2020. He was born in Cleveland, Ohio on January 8, 1956 to Vernon C. Pickhardt and Johanna M. Pickhardt. He was one of six children. The family moved to Sarasota, Florida in 1959 when Gerard was three years old. He graduated from Riverview High School in 1974 and earned his bachelor’s degree in marketing from the University of South Florida. Growing up in Sarasota, Gerard was always on the water. He was one of the youngest children to earn his scuba diving certification. In high school, he joined the swim team. His extracurricular activities included becoming a competitive water skier. Gerard cherished his children most of all. He is survived by his daughter, Alexandra Love Pickhardt Rausch, and his son, James Cameron Pickhardt. Gerard was a devoted father both in the care of his children and his incredible work ethic to provide for his family. His professional life was diverse, from his early days at J.C. Penny, to working at Arrow, the family business, with his father and two of his brothers. Working alongside his partner, he went on to build Winslow Life Raft, a highly successful global commercial life raft company. As a franchisee owner, he ran Flippers Pizzeria with love and enthusiasm. He cared about his customers and took pride in what he served. Along the way, he was always investing in and developing residential real estate, which was one of his greatest professional passions. In recent years, he lived in St. Petersburg where he attended St. Paul’s Catholic Church. Gerard will be remembered as a devoted Catholic with a kind spirit. His community there will cherish the memory of his friendliness and generosity. Even those who only met him once or only in phone conversations, attest to his kind and compassionate nature. He always kept in touch with as many friends as he could, asking about them and their families. Even through his treatments, he made time to write emails and make phone calls. His generosity led him to give to many community organizations and Catholic charities. Above all, Gerard will be remembered as a fighter. He was determined to beat his cancer and live his life to the fullest, right up until the end. In addition to his children, Gerard is survived by his siblings and their families, George Pickhardt, Dawn Graner, Vernie Pickhardt, Maryfaith Stone; and Mark Pickhardt. He is preceded in death by his parents, Vernon C. Pickhardt and Johanna M. Pickhardt. The family would like to thank all the caregivers who provided guidance and comfort throughout Gerard’s treatments up and during his final days. Gerard will be remembered and cherished for his friendliness and generosity and his devotion to his Catholic faith. The funeral has not yet been scheduled. Donations in lieu of flowers can be made to The Kind Mouse, Lighthouse Ministries, the St. Vincent de Paul Society, or Season’s Hospice. All are local charities. Due to the recent coronavirus pandemic, the Funeral Mass for Gerard will be delayed.

Gerard Joseph Pickhardt of St. Petersburg, FL went to be with his Heavenly Father on March 19, 2020. He was born in Cleveland, Ohio on January 8, 1956 to Vernon C. Pickhardt and Johanna M. Pickhardt. He was one of six children. The family moved... View Obituary & Service Information

The family of Gerard Pickhardt created this Life Tributes page to make it easy to share your memories.

Gerard Joseph Pickhardt of St. Petersburg, FL went to be with...

Send flowers to the Pickhardt family.