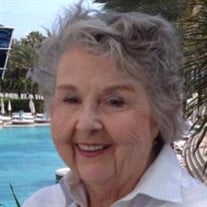 Georgeann Chandless Esmerado, a passionate quilt artist, whose creative talent and spirit touched everyone she met, passed onto eternal rest, Sunday, February 2, 2020. She was 80 years old. Her battle with cancer and pulmonary fibrosis came to an end while she was surrounded by family and friends. Georgeann Chandless was born on May 19, 1939, in Hackensack, New Jersey. Her father, Ralph Whitefield Chandless Sr. was a former State Senator from New Jersey, the Borough Attorney for Hasbrouck Heights, Hackensack and South Hackensack and a practicing partner for the law firm of Chandless, Weller and Kramer. Her mother, Mary Francis (O’Connor) Chandless was a homemaker. She was the third of five siblings. Her father affectionally called her Puddy. At Trinity College, where she earned a bachelor’s degree in 1961, she studied Art History and studied abroad in Mexico. She married shortly after graduation and stayed at home to raise her two children. In the early 1970’s, Georgeann taught first grade at Corpus Christi School in Hasbrouck Heights. Her professional life evolved into Human Resources, she served as an HR Manager for Evonik Degussa, Executive Air Fleet and Jet Aviation, all in Teterboro, New Jersey. Mrs. Esmerado married her husband of 25 years in 1994, at the foot of the Barnegat Light House on Long Beach Island in New Jersey. They were longtime residents of Ship Bottom, New Jersey and moved to Largo, Florida in 2018. She is survived by her Husband, Joseph Esmerado. A daughter, Elizabeth McGee Cifu and her husband Ronald of Lenoir, North Carolina. A son, James Granville McGee Jr and his wife Renata, of Cornwall New York. Five grandchildren and two great-grandchildren. She is predeceased by a brother, James Chandless of Davidson, NC and a sister, Elizabeth Smith of Hope, NJ. Georgeann will be laid to rest in Calvary Catholic Cemetery in Clearwater, Florida, after a funeral mass at St. Jerome’s Catholic Church in Largo, Florida. The family requests that in lieu of flowers, donations be made to the American Lung Association.

The family of Georgeann C. Esmerado created this Life Tributes page to make it easy to share your memories.

Send flowers to the Esmerado family.