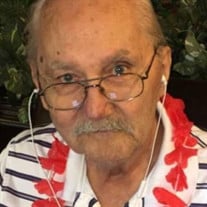 Frankie (Frank) Fulton Roberts gained his heavenly wings on Sunday, January 14, 2018 at 9:58 pm, surrounded by loving family and friends, which brings the number 14 full circle. He soldiered through a lot of heath issues and surgeries toward the end of his time on earth. He is preceded in death by his mother, Jesse Royal Roberts and his father, Frank Fulton Roberts. He is survived by his first wife, Naomi Roberts, and their two daughters, Sandra Roberts and Cindy Ranaud (Michael) and their grandchildren, Marty Johnson, Sara Williamson, Shane Williamson and great granddaughter, Lella Johnson. Frank is also survived by his second wife, Beth Roberts, and their children, Lindsay Roberts, and Michael (Mike) Roberts and his fiance’ (Savannah Davis), and their granddaughter, Cheyenne Raine Roberts. Frank was born in High Point, NC, where he attended school, earned his distinction as an Eagle Scout; joined the Navy during the Vietnam war and then started a family. During his military service, he served two tours of duty as E2-A flight technician on the first nuclear, the USS Enterprise. During one of his shore leaves in San Francisco, the movie Yours, Mine and Ours, was being filmed. Frank is seen coming off the ship during the beginning credits. Frank met his first wife, Naomi, in 1964, married the same year. They were introduced by mutual friends on a blind date. Sandra was born in October of 1965. Cindy was born in November of 1966. Frank moved to Myrtle Beach in the early 80’s, where he met his second wife, Beth while flying his trick kite. That night, they went on their first date, deciding to eat pizza and see Cheech and Chong. “Up in Smoke.” They married in 1983, and moved to Florida. Two years later, in 1985, Linsay was born. Two years after that, in 1987, Mike was born. Frank’s lifelong occupation was working as a copier technician for Xerox, SOS office Solutions and IKON, retiring in 2010. Frank enjoyed the beach, water skiing, as well as teaching Sandra and Cindy’s friends how to ski. He also loved to snow ski, making several trips out west and mountains of North Carolina with his children. He enjoyed reading, especially anything about WWI, certain television shows, including “How’s it’s Made”, “Swamp People, “ and “Keeping up with the Kardashians.” Most of all, he loved telling stories and being around his children and their friends. His proudest moments were serving in the Navy like his father, becoming an Eagle Scout and having a son amongst three daughters.

Frankie (Frank) Fulton Roberts gained his heavenly wings on Sunday, January 14, 2018 at 9:58 pm, surrounded by loving family and friends, which brings the number 14 full circle. He soldiered through a lot of heath issues and surgeries toward... View Obituary & Service Information

The family of Frankie Fulton Roberts created this Life Tributes page to make it easy to share your memories.

Send flowers to the Roberts family.