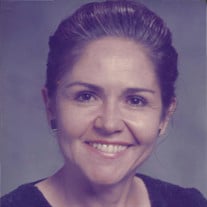 Fabiola Naranjo, devoted mother and grandmother passed away Thursday, 9/14 at the age of 78 after a 9-year journey with Alzheimer’s disease. Born in Manizales Colombia, of parents Jose Naranjo and Romelia Jaramillo she was the second of eight children (3 sisters and 5 brothers). From early on she had a call to serve others and always stood out for her progressive views on equality and social justice. She would always say, “sin la justicia social no hay progreso” which means without social justice there is no progress. She pursued a career in nursing and after earning a scholarship to study in the United States she interned at Belleview Hospital in NYC in the mid-60’s. Frustrated by the inequality and limited opportunity she saw in her own country, she chose to stay in the US and moved to Southern California to continue her profession as an operating room technician and serve others. She quickly developed a reputation for being a strong advocate for patients and her proficiency in the operating room. She was known to take on any surgeon or other personnel when it came to what was in the best interests of her patients. She met her husband Michael Romero and had one daughter, Gloria. While the marriage was short-lived, she devoted her life to her daughter and as a single mom there were many years of struggle. By the early 1970’s she had been diagnosed with progressively degenerative Rheumatoid Arthritis which by the mid 70’s had become so debilitating that she could no longer practice her profession. She returned to Bogota Colombia with her 4 year old daughter to care for her aging mother. Fabiola could not readjust to life in Colombia after so many years of being a US resident and returned in 1979 with her mother and Gloria to live in Hollywood Florida. She bought a home in East Hollywood, raised her daughter and was a long-time member of Little Flower Parish and earned her US Citizenship. She loved to garden, woodworking, caring for her Chihuahuas (Sugar and Bonita), staying informed about current events and talking politics. One of her life’s greatest milestones was being a grandmother to her only granddaughter Alexandra and she relished every moment of the last 19 years with her. In the last year, Gloria moved Fabiola to Pinellas County to reside at the assisted living facility she owned. She was beloved for her beautiful smile: even though she could not fully express herself anymore, her smile said it all. She had begun to decline Labor Day weekend, but seemingly true to her nurse’s vocation, she must have understood that Gloria needed to assist in preparing for Hurricane Irma and as soon as Gloria told her the post-storm recovery was almost complete, her condition became imminent. She was surrounded by the love of her life, her daughter Gloria and the kindness of the caregivers at Indian Oaks to the end. She is survived by her daughter Gloria Romero Roses and son-in-law Tom Roses of Broward County, her granddaughter Alexandra Roses (student at FSU) and siblings Marie Kidd of California, Yolanda Arbelaez of Bogota Colombia, Gabriel Naranjo of Florida, Francisco Naranjo of California and Jose Fernando Naranjo of Medellin Colombia, and dozens of nieces and nephews. The family requests in lieu of flowers, donations be made to the Alzheimer’s Association and/or the Arthritis Foundation to further research to prevent and find a cure to these debilitating diseases. A funeral mass is scheduled for Saturday, 9/23 at 9:30 a.m. Our Lady Queen of Heaven Catholic Church located at 1400 South State Road 7, North Lauderdale and interment immediately afterwards at Our Lady Queen of Heaven Cemetery. Friends and family are invited to the Roses residence after the committal service at the cemetery at 13431 Old Sheridan Street, Southwest Ranches, FL 33330.

Fabiola Naranjo, devoted mother and grandmother passed away Thursday, 9/14 at the age of 78 after a 9-year journey with Alzheimer&#8217;s disease. Born in Manizales Colombia, of parents Jose Naranjo and Romelia Jaramillo she was the second of... View Obituary & Service Information

The family of Fabiola Naranjo created this Life Tributes page to make it easy to share your memories.

Send flowers to the Naranjo family.