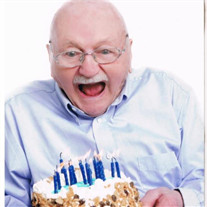 Fabian Frank Hutter, AKA “Fabs” was born on November 21, 1914 in Coplay, PA. At the time of his birth there was electricity in less than half of American homes and the television had not been invented yet. Gas cost $.12/gallon though most still traveled by horse and buggy. A loaf of bread was $.06 and a house could be purchased for $3500. Space had never been entered and the National Parks didn’t yet exist. There was no internet and no cell phones. Just imagine the scope of changes he experienced in his lifetime. Fabian graced the world with kindness, a large heart and a ready laugh. He was the oldest of nine children and was a father to six. He had 10 grandchildren, 13 great-grandchildren, and 4 great-great grandchildren. Fabian was surrounded by a diverse group of people who loved him dearly. He was always ready with a smile and a kiss for all. At nine years old, Fabian and a friend rode their bikes from PA to NYC to see his uncle, being questioned by a police officer at the George Washington Bridge but allowed to continue on. During his teen years he traveled across the country on freight trains. He participated in President Roosevelt’s Civilian Conservation Corps program in his early twenties and spent the latter half in Pearl Harbor with his first wife Betty. Fabian’s thirties saw him singing in lederhosen as a waiter in Pennsylvania. There he met the beauty Anne who became his second wife. Together they lived in Bethlehem and Allentown before moving with their family to Bridgeport, CT. Although Fabian left organized schooling after the 6th grade, he remained a self-educated man throughout his life. He was proficient in numbers, though unfortunately never won the lottery. He read the paper (without glasses!) daily and was willing to debate and discuss the happenings in the world. He stayed current with nutrition advice and swore by his vitamin regimen. Fabian had a zest for life that never tired. At 75 he learned to water-ski. In his 80s he purchased an in-home pilates machine. His 90th birthday was spent in the casinos of Las Vegas where he had a particular affection for the Caesar’s Palace girls. He wore a royal-blue suit to his 95th birthday party. He sang Frank Sinatra at a bar at the age of 96 and danced at a local concert at 101. Fabian passed away on September 27, 2018 and will truly be missed by all. Fabian will be best remembered though, not for the things he did, but for the person he was. He was extremely generous, willing to give the shirt off his back to a stranger. He was kind, non-judgemental, and an insatiable flirt. He was adventurous and easy-going. Fabs had a big, musical, all-encompassing laugh that made everyone around laugh too. He had quite the sense of humor, always willing to shout “Shaggy Dog” or have makeup or masks put on him to amuse his grandchildren. Truly, to know him was to love him. Fabian was a wonderful man!

Fabian Frank Hutter, AKA &#8220;Fabs&#8221; was born on November 21, 1914 in Coplay, PA. At the time of his birth there was electricity in less than half of American homes and the television had not been invented yet. Gas cost $.12/gallon though... View Obituary & Service Information

The family of Fabian F. Hutter created this Life Tributes page to make it easy to share your memories.

Send flowers to the Hutter family.