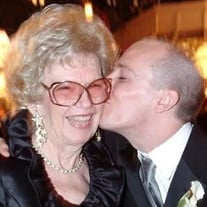 One of the coolest, smartest, and most generous people we've ever known passed away Friday, March 17, 2017. Our grandmother would have been 96 in just a few weeks. Betty Coleman of Palm Harbor, Florida, was born in 1921, the year after women won the right to vote and Prohibition started. She lived through the Great Depression, WWII, Elvis, Civil Rights, the JFK assassination, the moon landing, Watergate, Vietnam, hippies, disco, yuppies, the dawn of the computer age, the fall of Communism, the rise of youth culture, the internet, cell phones, 9/11, the Iraq Wars, and our first black president. It’s hard to fathom the span of time and culture that she experienced in one lifetime, as it almost certainly paralleled with some of the most poignant moments in history. She faced it all with grace and a sharp-witted humor, even amidst her own personal tragedies. She lost her only child—our mother—in 1992, from which she never fully recovered. As parents now, we can’t even dare to imagine how difficult that must have been. But she endured for her husband and her grandkids. Our grandfather passed away 10 years ago after struggling with the effects of 2 strokes. And despite reminding us nearly every time we spoke that she had lived far too long and was ready to leave this world, she kept going, and was able to meet her great-grandchildren whom she adored. She also spoke often of how wonderful and blessed her life had been, despite everything. We will be forever grateful that we were able to go see her the weekend before she passed and say our goodbyes while she was still able to communicate following a massive stroke a few days prior. Betty Coleman, aka “Nomie Betty”, you will be forever celebrated and dearly missed. Betty is survived by her grandchildren: Tim Tomkinson (and his wife Katherine) and Melissa Reese—all of Jackson, Wyoming—as well as 4 beautiful great-grandsons.

One of the coolest, smartest, and most generous people we've ever known passed away Friday, March 17, 2017. Our grandmother would have been 96 in just a few weeks. Betty Coleman of Palm Harbor, Florida, was born in 1921, the year after women... View Obituary & Service Information

The family of Elizabeth "Betty" Ellen Coleman created this Life Tributes page to make it easy to share your memories.

One of the coolest, smartest, and most generous people we&#39;ve...

Send flowers to the Coleman family.