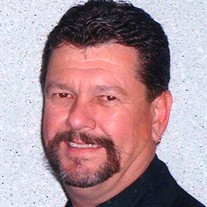 Donald Richard (Ric) Carvalis is survived by his wonderful, loving wife, Betty Jo, his mother, Violet (Vi) Hayworth, his stepfather, Charles R. (Chuck) Hayworth, his sister, Deborah Ann Rivard, two brothers, Harry Carvalis, Jr. and John E. Carvalis (Alycia) all of St. Petersburg and one Stepbrother, Dana Hayworth (Sandra) of Middleburg, Florida. He is also survived by 3 nephews, Kenneth (Sarah) Carvalis and Nicholas (Melissa) Rivard of St. Petersburg and Kevin Rivard of San Francisco, Ca., 2 nieces, Michele Carvalis (Dennis) Enos and Bethany Carvalis of St. Petersburg plus numerous other relatives as well as his “Baby”, his beautiful, brown Lab, Popi. Ric was born in Montgomery, Alabama on April 29, 1957 to Violet and Harry Carvalis, Sr.(deceased). Ric is predeceased by his Grandparents, John E. and Mary A. Godwin and Leo and Arizona Carvalis of Pensacola, Florida. Ric graduated from St. Petersburg High School and attended St. Petersburg Junior College, in addition to Home Appraisal School. He owned Carvalis Appraisal and Club 28 Sports Bar with his wife, Betty Jo, as well as rental properties. Ric loved his weekend motorcycle rides with Betty Jo and their friends, often making trips across the Skyway Bridge. They also rode in the Toys for Tots events. Ric and Betty Jo were very active in Optimist International and the North Florida District of Optimist International. Ric and Betty Jo are members of The Sunset Optimist Club and the Downtown Optimist Club of St. Petersburg. Ric built new Optimist Clubs and served as President of the Downtown Optimist Club and was currently serving as President of the Sunset Club. In addition, he served as the Lieutenant Governor of zone 9/St. Petersburg-Sarasota Clubs. He also served in numerous Optimist International positions for many years. He served as Distinguished and outstanding Governor of the North Florida District twice, plus chairing practically every program the district offered. He was known for his success as Chairman of the North Florida District Optimist International Foundation, which collects funds for youth scholarships. You never were quite sure what he may auction to raise funds for this great cause. He usually took first place with his fun antics. He was loved for his sense of humor and desire to help others. Ric had a room full of awards and trophies from all the Optimist events and competitions he won. He was honored with the North Florida District Hall of Fame Award, which is the most prestigious of all Optimist Awards. He and Betty Jo loved shopping for items for the Church’s Food Pantry and were always generous and eager to help others. He was a loving and fun husband, a great friend, a caring brother, a neat Uncle, a very special son and a good friend. He will be missed by so many and remembered by all who knew him. He left this earthly home on July 29, 2018. The family wishes to thank our good friends and neighbors for their love and support during this difficult time and request in lieu of flowers a donation be made in Ric’s Memory to Grace Bible Church Food Pantry. Services will be held at Grace Bible Church, located at 555 – 61st Street South, St. Petersburg, Fl, 33707 on Saturday, August 4, 2018 at 11AM with lunch following the service.

The family of Donald "Ric" R. Carvalis created this Life Tributes page to make it easy to share your memories.

Donald Richard (Ric) Carvalis is survived by his wonderful, loving...

Send flowers to the Carvalis family.