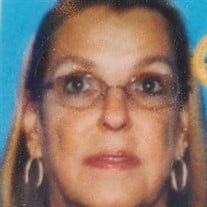 Diane Carol Stoffel (Daleen) 63, of Largo, Florida, passed away on May 31st 2020 at Morton Plant Hospital, after a long battle with Cancer. Her husband John was there to hold her hand as she passed. She had been a resident for 7 months at Wright’s Nursing Home and Rehab. She was born to parents Donald and Shirley Daleen, on April 28 1957 in Detroit, Michigan. The family lived in Taylor, Michigan until 1969 when they moved to Largo, Florida to live closer to grandparents. She attended Seminole Junior and Senior High, class of 1975. Diane work part-time at an open air produce market during her teen years. She also worked for several florist shops in the area where she learn how to make flower arrangements. She enjoyed this job and had a natural talent for it. Her last job, before retiring after an injury was with the Pinellas County Schools, at Pinellas Park Middle School. Diane met John Stoffel in 1991. They married on August 13th 1994 in Largo Florida. Diane and John had just celebrated their 25th wedding anniversary this past August. Diane is survived by 4 children Dena (Ty) Kilpatrick of St. Pete Beach, Florida, Nicole Maychuk, Michael Maychuk, and Donald Maychuk, all of Pennsylvania. She was preceded by her oldest son Derek James Kilpatrick who passed in 2010. Two step daughters, Alissa and Serena. Diane also has 8 grandchildren and 1 great-granddaughter. She is also survived by her sister Laura (Frank) Leta of Bronson, Florida. Diane has many cousins, nieces and nephew all of whom she loved. Diane was passionate about helping our Veterans, by becoming a member of several veterans’ service organizations. She was a member for many years, of the Army and Navy Union Garrison #3697 of Largo, Fl. She held several offices including Lady Commander of the Women’s Auxiliary. She and John were also members of the American Legion Post 252 of Seminole, Fl and 273 of Madeira Beach Fl. Diane and John spent a lot of time helping veterans navigate the paper work of the VA Hospital so veterans could receive their medical benefits and disability payments. Diane was well-known for taking these veterans under her wing. She would drive them to their appointments and pick up groceries for them. Many did not have families that were local or no families at all. Diane and John would cook meals, (she and John are very good cooks), and take meals, especially during holidays to these friends. Diane was an avid defender and supporter of all animals and wildlife. Over the years she and John open their home to many dogs and cats. She leaves behind 2 loving fur babies who miss her very much. She lived a quite life with her loving husband, John. She loved her family with all her heart. Family was very important to her. She will be greatly missed by family and many friends. The family has entrusted the arrangements to Grasso Funeral Home, Memorial and Cremation. Diane will be laid to rest at Bay Pines National Cemetery, Bay Pines, Florida, during a private service, (Due to COVID-19). A Memorial Tribute, to celebrate her life will be held at a later date.

Diane Carol Stoffel (Daleen) 63, of Largo, Florida, passed away on May 31st 2020 at Morton Plant Hospital, after a long battle with Cancer. Her husband John was there to hold her hand as she passed. She had been a resident for 7 months at Wright&#8217;s... View Obituary & Service Information

The family of Diane Carol Stoffel created this Life Tributes page to make it easy to share your memories.

Send flowers to the Stoffel family.