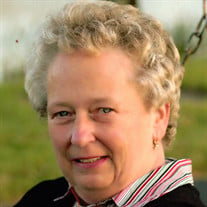 Carolyn Sue Roy (“Suzi”) of Clearwater, FL, formerly of Waynesboro, PA., went to be with the Lord on May, 27, 2018 at the Palm Garden of Largo Nursing Facility after a long battle with Alzheimer’s. Carolyn Sue (Zimmerman) Roy was born March 2, 1951, the daughter of the late Gladys B. and Lloyd Zimmerman. Better known to everyone as Suzi, she was pre-deceased by her sister, Mary Lou Carbaugh; and her brothers, Harvey and his wife Pat; and Donald and his wife Lorraine. Suzi was very conscientious and hard-working, starting her working career at “The Dipper” in Waynesboro, and then for FBC stores and Grove Mfg. Upon leaving Waynesboro in 1986, she then continued her working life in various banking positions with Bank of Rhode Island, Navy Federal, and finishing her working Career after 15 years with the Bank of Newport. Throughout her career, she was recognized as an outstanding and valued employee. In 2005, she moved to Clearwater, FL. Suzi’s greatest love was for family, friends, and get-togethers. She enjoyed traveling and was an avid reader. She leaves her husband of 42 years, Roger Roy of Clearwater; her daughter, Mica Piper of Waynesboro; two stepsons, Roger Jr. and Fiancé Cameron Brooks, North Myrtle Beach, SC; Eric and his wife Jill, Tulsa OK; two granddaughters, Kira and Kyla Piper of Waynesboro; 4 step-grandchildren, Mallory, Foster ,Madison and Paul; brother-in-law Orville Carbaugh, Waynesboro; sister-in-law Jackie (Roy) and her husband George Tranchemontagne of Maine; two very special friends, Jim and Linda, as well as numerous nieces, nephews, and great-nieces and great-nephew. In lieu of flowers, the Family would recommend donations to the Alzheimer’s Association in your area or to the Activity Fund at Palm Garden of Largo, 10500 Starkey Road, Largo FL 33777.

The family of Carolyn Sue Roy created this Life Tributes page to make it easy to share your memories.

Send flowers to the Roy family.