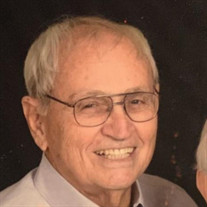 Carl George Hawkins, of Indian Rocks Beach, beloved husband, brother, father, grandfather, and great-grandfather died on Monday, November 16th, 2020 in Largo, Florida. Carl was born on December 31st, 1938 to Ralph and Edith Hawkins. Carl had many siblings, his two brothers, Robert Benzel and Leland Hawkins, one half brother, Tim Hawkins, one sister, Alva Lea Edwards, and two half sisters, Bunny Ashmore and Brenda Monday. Carl was a graduate of Lakeland High School and the University of South Florida. He had also been a member of the National Guard and a Fourth Degree Knight with the Knights of Columbus. Carl was a well loved businessman in Largo for 35 years at C&C Dry Cleaners, as well as a self-proclaimed, self-taught tech wiz. Carl also loved being an usher at St. Jerome Church for more than 44 years. Carl was preceded in life by his son Carl George Ⅱ. Carl is survived by his ever saintful wife of 56 years, Carol Hawkins. As well as his daughter and son-in-law, Tina and Brad Currey, his grandchildren, Megan and Morgan Hawkins and Katryna Currey, and his great-grandson Jeremy Pask. Carl was a true Florida cracker who could make anyone smile, even on the worst days. He was always ready to help people in need and he always gave the best advice. Carl and his jokes will be truly missed and they will forever be in our hearts. **In Lieu of Flowers, Please Send Donations to St.Jerome Church Life Line Ministries

The family of Carl George Hawkins created this Life Tributes page to make it easy to share your memories.

Send flowers to the Hawkins family.