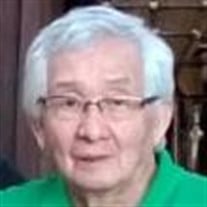 On Sunday, December 29, 2019, Bill I-Lun Young, loving husband and father of two children, passed away at age 77. Bill was born on May 6, 1942 in Chengdu, Sichuan, China to Chong-An Young and Sho-Yong Shuan. During his childhood, he moved with his parents to Kun-Ming, Nan-Jing, Guang-Zhou then Taiwan. Each city he lived in had its own dialect which contributed to his unique accent in spoken Mandarin and English, which needed a little time to understand. He graduated from the Air Force Academy in Taiwan, Republic of China, in 1963, where he became a fighter pilot and a lieutenant in the Air Force. In 1970, he was transferred and promoted as Section then Squadron Commander of Squadron 26, and held the position of a lieutenant colonel. In 1974, he was bestowed the honor of representing the Republic of China Air Force, to receive special training in Texas, USA, in preparation for F5 fighter plane change. From 1978-1989, on behalf of the Republic of China Air Force, the Taiwanese government sent Bill to train the Republic of Singapore Air Force where he served as a captain instructor. He had 5,700 hours of flying time. On May 26, 1968, he married Grace Yu-Wei Shieh. They raised one daughter, Alison Zu-Yung Young and one son, Eric Shih-Pong Young. Bill had a passion for sports especially golf. He was also an avid reader and a philosopher. He was one who challenged what was thought to be common sense, didn’t stop asking questions and re-examined conventional ways of thought. He had always lived his life to the fullest. He was known for his authenticity, his quick wit, his big heart, his infectious smile, and his generosity. He was well loved by his friends from all over the world who appreciated him for his depth of ideas and thoughtfulness. Bill was preceded in death by his father, Chong-An and his mother, Sho-Yong. He is survived by his wife Grace, his two children, Alison and Eric, his brothers James and Spencer, his sister, Shao Lun, and several nieces and a nephrew. A funeral service will be held on Saturday, January 4, 2020 at the Grasso Funeral Home in Ulmerton Road, Largo, Florida at 4 o’clock p.m. Flowers may be sent to 12515 Ulmerton Road, Largo, FL 33774. Donations may be sent to the Pulmonary Fibrosis Foundation (https://www.pulmonaryfibrosis.org/medical-community/pff-research-funds).

On Sunday, December 29, 2019, Bill I-Lun Young, loving husband and father of two children, passed away at age 77. Bill was born on May 6, 1942 in Chengdu, Sichuan, China to Chong-An Young and Sho-Yong Shuan. During his childhood, he moved with... View Obituary & Service Information

The family of Bill I. Young created this Life Tributes page to make it easy to share your memories.

Send flowers to the Young family.