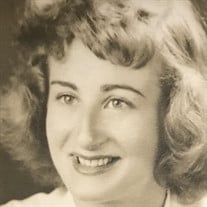 Betty Milhoan, a woman of extraordinary dignity and an unassailable honor, passed away November 18th at 3:20 p.m. She was born one of five children to Peter and Anna Medved on March 11, 1922, in Masontown, Pennsylvania. Betty moved from New Rochelle, New York to Florida in 1958 with her late husband, Charles Robert Milhoan and their four children: Stephanie, Robert, Sandra, and Michael. She had the heart of a lion and a loving soul, that I’m sure could weather the apocalypse! Betty had an immense love of music and the arts, that she gifted to me, her son Michael. One of my favorite pictures is of my mother playing the guitar with me accompanying her playing the snare drum, when I was five or six. It's a memory that is indelibly etched in my soul, along with countless others. Her eyes would light up when she saw me as mine would when I saw her. Her laugh was the most infectious one on the planet and I would love to make her do just that. She meant the whole world to me and I’m going to miss her desperately. Betty, her brothers, and a lot of her friends enlisted the day after Pearl Harbor and she would proudly proclaim to any and all that she was a machinist mate first class! My mother was the archetype for the greatest generation. She loved her country almost as much as she loved her children... ALL of them! I had the unequivocal honor of taking care of her and looking after her at the end of her life and it was, easily, the greatest, most rewarding endeavor of my lifetime. Uncompromisingly honest and genuine, there was a toughness and a grit to Betty that you didn’t want to get on the wrong side of. But, the blinding light that emanated from that woman is going to be missed, not only by me, but by most anyone who’s ever met her. I love you mama, more than life itself and I’ll see you in heaven one day! You can play that PAINFULLY out of tune piano and we can sing some songs! Well, let me do the singing, OK?

Betty Milhoan, a woman of extraordinary dignity and an unassailable honor, passed away November 18th at 3:20 p.m. She was born one of five children to Peter and Anna Medved on March 11, 1922, in Masontown, Pennsylvania. Betty moved from New... View Obituary & Service Information

The family of Betty Medved Mllhoan created this Life Tributes page to make it easy to share your memories.

Betty Milhoan, a woman of extraordinary dignity and an unassailable...

Send flowers to the Mllhoan family.