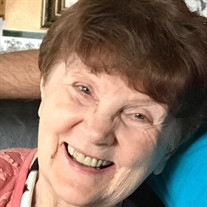 Barbara S. Bostian left her body on Tuesday, June 30, 2020, at the age of 82. Throughout her earthly life, Barbara sought deep connection, both with other beings and with something greater. Her longing for spiritual truth and her desire for meaningful relationships were her two most fundamental, and intertwined, guiding principles. She was born Barbara Sue Johnson, in Danville, Virginia, toward the end of the Great Depression, on September 11, 1937, to parents Harry and Thelma (née Swann). Barbara was raised Baptist and attended an affiliated women’s college and then a seminary, both in Raleigh, where she met her first husband, K. Eugene Bostian. After ten years of marriage, much of it spent in Wisconsin, they divorced, and Barbara began raising their three children, Lori, Jeff, and Kyle, as a single mother. She also began exploring alternatives to her Baptist background, attending Unitarian churches and experimenting with Transcendental Meditation. In her early forties Barbara married again, to William C. Pyle, and the family moved from a Minneapolis suburb to Amherst, Massachusetts. She’d gone from the conservative South to the moderate Midwest to the progressive Northeast. In her new environment Barbara found a religion, the Bahá’í Faith, that rang true for her. Serving the goals of the Faith -- which include world peace, equality among all people, and the eradication of racism, poverty, and hunger -- and participating in its communities of believers became cornerstones of her life for her remaining forty-plus years. After five years she separated from, and later divorced, her second husband. With her two older children, Lori and Jeff, no longer living at home with her, she returned to North Carolina (Chapel Hill) and earned a master’s degree in public health. Her subsequent two years working as a public health educator with Native American tribes in the region around Reno, Nevada, were among the most rewarding of her professional experiences, which also encompassed personnel manager in a bank and editor for a non-profit research institute. The latter job brought her to Florida, where she resided for most of her final three decades, in St. Petersburg, St. Pete Beach, Gainesville, and Bradenton. Barbara’s commitment to her Faith and her interest in other cultures led her to travel to various parts of the world. She toured Egypt and Greece with her three children. She twice went on Pilgrimage to Bahá’í holy sites in Israel, once accompanied by her youngest son, Kyle, with whom she also visited Jerusalem and the Palestinian territory there. In her late fifties, Barbara fulfilled a lifelong dream and demonstrated her adventurous spirit by going solo to China. Her two-month trip sparked such joy she returned a year later and spent two years teaching English to university students in Henan Province. Her experiences in China transformed her through profound satisfaction. She came home with what she called a second family of former students and friends, many of whom continued to correspond with her to her final days. Barbara went back to China a third time, then in her late sixties, for six months. In retirement, she taught English to Chinese students at the University of Florida through a free program she started. Singing was another cherished activity of Barbara’s. She participated in several choirs over the years, most recently the Bay Chorale of Bradenton. She also loved walking, especially with long-term friends Ann Haendel of St. Pete Beach and Joanne Auth of Gainesville. Barbara faced some serious health challenges in her last dozen or so years. She nearly died from complications following surgery to replace her aortic root and valve in 2006. But she still had work to do here and pulled through. She underwent a double mastectomy in 2013 and just received her official permanent cancer-free report in 2019. By then she was experiencing a fairly rapid decline in wellbeing, including advanced dementia requiring professional assistance. She spent her last few months in the devoted care of the staff at Arden Courts of Seminole. She passed with son Kyle at her bedside and the Bahá’í holy phrase “Alláh-u-Abhá” in her consciousness. She’s survived by her three children, Lori Weaver (Tom) of Shutesbury, Massachusetts, Jeff Bostian (Tana Aurland) of Easthampton, Massachusetts, and Kyle Bostian (Tiffany Wilhelm) of Pittsburgh, Pennsylvania, as well as two grandchildren, Jennifer Weaver and Allan Weaver (Chinda), and three great-grandchildren, Alivia Robinson, Brooklyn Court, and Jazmyn Weaver. She was affectionately known to the youngest generation as Gramma Gigi. The second of her former husbands, Bill Pyle of St. Pete Beach, remained a close friend and loving supporter right to the end. She will be dearly missed by all of them and by many others across the country and around the globe, especially members of her beloved Bahá’í communities. Barbara will be interred in accordance with Bahá’í customs at Heartwood Preserve, a green cemetery, in Trinity, Florida, on Friday, July 3. Members of the Bahá’í Faith are encouraged to contribute to the Fund in her memory. Others wishing to make a donation on her behalf, might do so to any organization that promotes justice. Although a genuine lover of all humanity, she was an advocate in particular for women, Native Americans, and the environment.

Barbara S. Bostian left her body on Tuesday, June 30, 2020, at the age of 82. Throughout her earthly life, Barbara sought deep connection, both with other beings and with something greater. Her longing for spiritual truth and her desire for... View Obituary & Service Information

The family of Barbara Sue Bostian created this Life Tributes page to make it easy to share your memories.

Send flowers to the Bostian family.